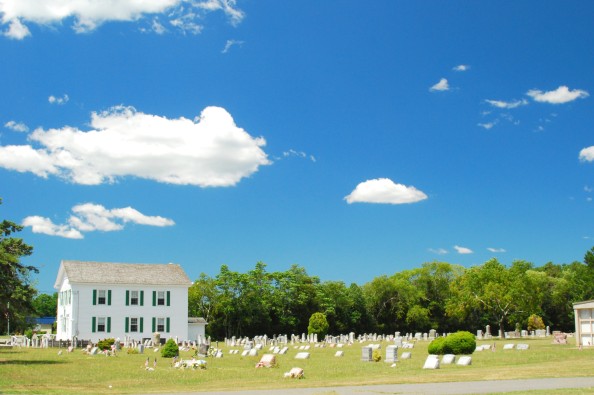 The mourners filed from the cemetery, somber and solitary for all that they were together in a group. Behind them, the raw dirt peeked from beneath its faux green carpet, waiting only for the last one to disappear before being uncovered and dumped back into the hole from which it came.

On rainy days, the parade of black umbrellas was a notable difference, but everything else remained the same. The solemnity, the slowing down.

The little boy peering from his window on the other side of the fence watched them all. His mother hated it, couldn’t bear the thought that her precious little one was obsessed with the morbid, with the ruthlessness of death.

But she didn’t understand, and he was still too young to have the words to explain to her how it wasn’t the dead that fascinated him so, but the living. He watched the people who came to each and every funeral. He watched for their loves and their lives. He watched them comfort each other and refuse comfort offered.

From them, he learned to care, not just for those he knew and loved, but for everyone.

Olinda lifted the window until it was fully open, to let in all the light she possibly could. The weather had been particularly cruel lately, and it was high time that spring set in. The curtains were heavy with dust and disuse; the allergens they kicked up caused her to sneeze into her elbow.

The donation from the church would be coming later, and Olinda needed the house to be ready. At least the sitting room. At least the front porch. Amazingly enough, the sitting room was in pretty good shape, aside from the curtains. She tried to keep up with the cleaning throughout the winter, since she couldn’t get out and do anything else.

Her hand rubbed her hipbone through her dress; the arthritis was getting worse and worse. This may be the last year she did her spring cleaning all by herself, but she hoped not. The only thing worse than a stranger cleaning one’s house was having to find a stranger to clean one’s house.

Her grandkids were no help. All they cared about were their pokeymans and their eyephones. No help at all. Olinda shook her head in disgust at the thought. They needed to use those fancy phones to fill out an application for a job. She was disappointed in herself; she thought she’d raised her own kids well enough that they should have known how to raise theirs.

It was too late to worry about that now. Olinda glanced at the clock and hurried to get to work. The church people would be here in about three hours. Just enough time to wash and dry these curtains.