Yes, I am sorely lacking in recent Time Warp posts, I know. And this one is so late! But it’s here. 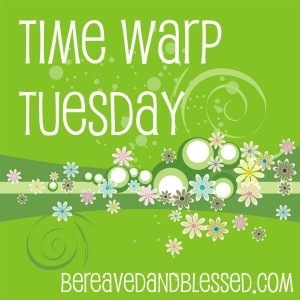 Time Warp Tuesday is hosted on the second Tuesday of the month by Kathy at bereavedandblessed.com. It’s a day to revisit old posts and reflect on the changes that have occurred since then.

I am happy to announce that I have not lost my keys since finding them that day! I probably shouldn’t be too happy, though; there’s a full two months to go before I achieve a whole year.

Our system remains the same. My one set, his car set, his house set, and the mailbox set. What’s changed are the wristlet key chains I’ve made for each of us, not to mention the ones I made for bloggy friends that are all around the country, which tickles me pink!

It’s not just keys. I think there’s been an integral shift in the ‘little loose things’ compartment of my brain. It could be that I’m determined to one-up Abby. I swear, a two-year-old should not be able to keep better track of where I put things than I am! A few weeks ago, I left my phone sitting somewhere, and heard it ringing from the living room. I asked myself aloud where I’d left it, and Abby took it upon herself to answer me: ‘in your room, where you left it, Mom.’ Her ‘duh’ tone floored me. Since then, if I can’t find something, I ask the know-it-all, who usually does know. And yet she still tries to tell me she doesn’t know how to put (pick an item of clothing) on.

But all on my own, I’ve been able to tell Ian where the hedge clippers are, where the tape measure is, and a few other sundry items. I’m just lucky, right?

Or the answer could be the recent go-through-every-item-in-the-house-to-prepare-for-home-study activities. Who knows?

I’ll embrace it while it lasts, keys in hand.

I’m not exactly participating in Time Warp Tuesday this week; I’ve never written about 9/11. I’ve never felt that I needed to, but as I think more and more about posterity and mortality, it seems well-advised to do so.

As I said yesterday, September 10th is a dual birthday, so the night before was spent hooting and hollering at a pool hall. I gave most of the rides home, being the ‘responsible party.’ To this day, what 9/11 means to me is the last night I spent with David, our friend who is no longer with us. It has affected me in many other ways, and still does, since I live next door to Barksdale AFB, but still, I see memorials and news stories about 9/11, and I miss David.

My phone ringing woke me up that morning, a little after ten. It was my mother, the family physician, mother of four, ex-Marine, in the only absolute panic I have ever heard from her.

‘They blew up the Pentagon and the President is coming there! You have to leave! I don’t know what’s going to happen!’

It wasn’t her words; it was her tone. My sister has been missing, my brother has threatened suicide, my other brother escaped from a juvenile detention center, and she has called me, but I have never, ever heard her like I heard her that morning. My mother is the calm center of the universe; even when she has been screaming so furiously her eyeballs threaten to burst, she is always in control. This was pure panic.

I did the only thing I could. I called my manager and told her I couldn’t come in that evening because my mom said so, I got in my truck, and I left. It was easily fifty miles before I was really awake, but the rest of the trip was spent listening to the conflicting stories on the radio stations that slowly but inexorably slipped out of range, eaten by the miles.

When I arrived I realized I didn’t even have a change of clothes, but at least my mother was herself again. By that time, the President had already come and gone from Barksdale, with no accompanying explosions, and I think she’d realized she may have overreacted. We spent the rest of that day glued to the news networks, just like everyone else. I talked to my boss and knew I had to go home the next morning, as we only had a handful of civilian employees.

The next three days I worked open to close. I was exactly half of the delivery staff that week, but since the other guy had a real job, I worked for everyone else. Every house was the same; one distracted person handing me cash without looking away from the screen. Every street was the same; open front doors or curtains displaying everyone gathered in front of the television at every house.

What struck me the most, afterwards, was how long it took the military to close the bases. It was well into 2002 before you needed something besides a cartop sign and a smile to get on base, and 2004 before you needed a military sponsorship. The Air Force has done five background checks on me now, and they didn’t even start that until 2009.

All the changes, all the precautions, what good are they really? What can a threat level color do for national security? It doesn’t make sense to me. The same thing can happen tomorrow, or any day, and no amount of obstructing pizza delivery or prohibiting bottles of water is going to change that. Discrimination has been the benefit we’ve been reaping.