Her garage was the most up-to-date scientific lab in the city. If the local university had the funding that she did, they would have certainly come up with a cure for cancer in no time at all. For that matter, if her interests had leaned in that direction, even the least little bit, she could have done it herself.

But she was slightly crooked of center.

She stirred the pot and gently sniffed the fumes rising up from the simmering liquid. It’s molten gold! she thought, and reached for a beaker. Grabbing a deep ladle, she very cautiously dipped out a spoonful of the steaming liqueur, and even more carefully poured it into the Erlenmeyer before placing it alone atop a separate stainless steel table to cool off enough for further testing.

That done, she retired to her living room to put her feet up and binge watch another season of Buffy.

He cackled like a Bond villain, and continued to carefully explain the severe corrosion the acid bath was going to have on her body if she didn’t talk.

She continued smiling, shaking her head at his ever more frantic insistence. “I don’t believe you want to hurt me,” she said.

I blew out a breath, directing it upwards to flutter my bangs across my forehead. This wasn’t going to work out. I pushed away from my desk, the carefully aligned row of Erlenmeyer flasks and the murky deformity that lay within the last one to the right.

“What’s for dinner, babe?” I hollered down the hall. My partner was in his own office, proofreading college essays. A thankless job, but it brought in enough extra money that we could afford a fancy dress date night once a month.

He didn’t respond. This wasn’t entirely unusual; sometimes he got super engrossed in whatever cockamamie theory some student was proposing and tuned out the rest of the world.

I tiptoed down the hall to the door of his office, where I paused to listen quietly. Sometimes a soft chuckle would escape the confines of his office, but I didn’t hear the occasional paper shuffle that usually accompanied it.

I lifted a finger and tapped gently on the door, then more insistently when he didn’t answer me. Maybe he had his headphones on again, but he hardly ever turned the volume up loud enough to not be able to hear me yell if I needed something, which was pretty dang often.

I’m pretty accident prone, and in spite of a ton of safety equipment, I’ve been known to stab myself with a needle. Once I even got a tiny droplet of extremely corrosive acid up and over my safety goggles. I still have the little scar right next to my left eye. Man oh man, that was a scary day, let me tell you.

I dropped my still-gloved hand to the knob and turned it as I pushed on the door. And there he was, the man of my dreams, kicked back in his recliner and watching YouTube videos on his phone.

“Instead of working like a responsible adult!” I hoped that I raised my voice enough for him to hear me over whatever garbage he was watching. I had.

He slammed the footrest of the recliner down and closed and quickly snatched the headphone cord out of the jack in his phone. “Oh, hey, babe, I didn’t hear you knock. You did knock, didn’t you?” He raised an eyebrow at me.

“You’re not gonna get off that easy, mister. I know we have our rules to leave each other alone while we’re working, but you didn’t answer when I did knock, loudly, and besides, it sure looks like you’re not actually working anyway. Are you? Is this some new sort of research that you’ve embarked upon?” I was pretty upset that he’d accused me of being a jerk when he was the one being a jerk. The jerk.

He raised his palms in submission. “Okay, okay, you’re right. I”m not working. But I’m just taking a quick break from working, so I might as well be. Jeez, calm down.” He turned his wrist to check his watch. “I’m so sorry, I didn’t realize it was so late. Let’s go get something for dinner, shall we?” He rose and gave me a kiss on my cheek as he passed by, towards our bedroom where I’m sure he was going to get a fresh pair of socks from the dresser.

How can I stay mad at that? I can’t. “Did you have something in mind for dinner?” I whined as I followed him to the bedroom, where sure enough, he was digging furiously through the sock drawer, brows knit in fierce concentration.

“Have you seen my green socks? They’re not in here.” He trailed off, pouting his lower lip out the tiniest bit. “I could have sworn I washed them when I did laundry last weekend. I specifically remember folding them and tucking them back into the sock drawer.” He looked up at me. “Have you seen them?”

I hung my head, abashed. “See, you were sleeping so good this morning that I didn’t want to turn the light on wand wake you up, so I just grabbed the first pair that my hand touched when I went in the sock drawer, and well,” I grasped my pant legs and slowly raised them. “Sorry.”

He laughed and gave me a kiss. “But where’s the other one, silly goose?” 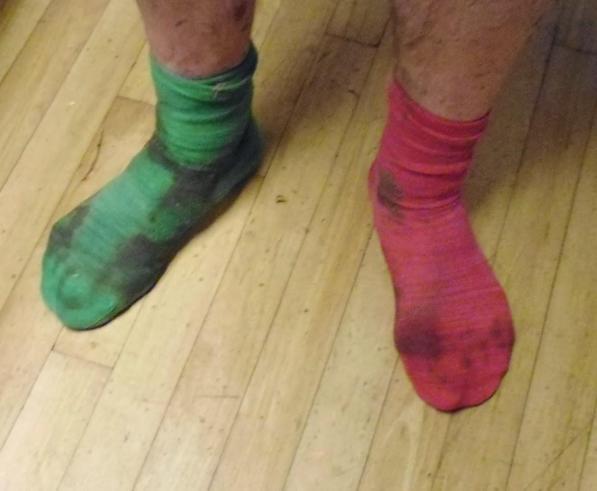 When I woke up this morning I could feel the eyes on my skin, crawling all over me, making sure nothing I did was missed. I don’t like the feeling. I showered as hot as I could stand it to force my body to forget about it, but that didn’t work. I pulled my clothes on my still-damp body and headed for the kitchen for breakfast.

The meatloaf had eyes in it. I decided to pass on breakfast.

I flopped on the couch and dug the remote from under the cushions. I hit he power button and tried to zone out in front of daytime television. It didn’t work. Court shows are only so distracting.

When I signed up to be a guinea pig for this experiment, I didn’t think it through; it just seemed like an easy way to take a year off. I should have read the fine print telling me that I never got a day off.

After nineteen weeks of being watched, I can’t escape it anymore. Cameras and sensors and mics, oh my.

Fiction for Tues Truthiness at TBP