Turn left at the tall statue, she said. You’ll know it when you see it, she said. Stanley was so busy grumbling to himself that he was halfway past the tall, recognizable statue before he saw it.

His tires squealed and screeched as he slammed on the brakes to take the sharp turn. Pedestrians leapt from his path. The clown sitting on the side of the building remained impassive to all the ruckus, even as Stanley nearly took off with his cart.

Fortunately Stanley finished his turn without murdering anyone. His sister Mary’s grand opening would not be missed, yet.

For as long as Stanley could remember, Mary had wanted to open up a shop. He remembered her as a small child, prancing naked in the living room, offering the wares she’d brought fresh from her bath. A toy duck, a bottle of shampoo, a dripping facecloth. He smiled to himself as he remembered another time when she’d been dancing with a loaf of bread and nearly knocked down the gargoyle that had been by the window since, as far as they were concerned, time immemorial.

It was actually a souvenir from their grandfather’s trip to England, but no one had ever told the children that story. It wasn’t a very long story. Grandfather was leaving a brothel, and a hawker offered him the gargoyle.

“Ten quid and all the joy in the world will be yours!” the hawker promised. Grandfather paid up and carted the heavy thing along with him as an excuse for being out alone.

It was probably the brothel part that kept the story from being told.

But since Stanley knew none of this, it never bothered him.

Three minutes after his near miss with the solemn clown, Stanley parked behind a long line of cars. They must all be here for the opening, he thought. His chest swelled with pride for his little sister.

Sure enough, as he reached the doorway of the brand new shop in the old, ugly building, he could see that the place was packed. He looked up for a moment, savoring the sight of Mary’s shop’s sign that proudly labeled the place Antiques, Et Al. With a broad smile, he turned the knob and pushed the door open, greeting the crowd within.

He moved quickly to dodge a little girl wearing a plastic beaded necklace, three cheap bangle bracelets, and a rhinestone tiara, but no shoe on her left foot. A woman, possibly her mother, chased her through the hustle and bustle with a small left shoe in her right hand and a look of near-panic on her face.

Eventually, Stanley made it far enough into the shop to catch Mary’s attention. She rushed to greet him with a hug.

“Have a cookie!” Mary exclaimed. “They were free from the neighbor!” A Chinese takeout place rented the adjacent building.

Stanley took a fortune cookie from the basket Mary was brandishing and cracked it open to reveal a blank piece of paper where a fortune should have hidden.

“Story of my life,” he shrugged, dropping the paper back in the basket and popping both halves of the cookie into his mouth.

I know, it sounds a little silly coming from someone whose Instagram name includes the word “selfies,” but I don’t get them. Selfies, that is.

I must be from the wrong generation. Ian doesn’t have a problem taking a zillion selfies; my youngest brother thinks nothing of picking his phone up to snap one or two or sixteen during dinner or even mid-conversation.

I have a block. Pictures use film, for crying out loud! They cost real money to develop! They take time and a side trip and chemicals!

Even now, I can’t adjust to this aspect of the digital age. And I am definitely far too embarrassed to hold my phone up for everyone to see while I take a dozen duck face pics in the middle of the mall, as I see people doing every day. I prefer to sneak my selfies.

I’m even embarrassed for Ian to catch me at it when I’m trying to get some good shots of my super cool eyeliner job.

This is only worsened by the roominess of our new bathroom, and the ease with which I can slap that stuff on my face. And the excellent lighting, especially in the morning. And the sheer number of mirrors. The list goes on.

It’s just weird. The things I notice when I’m busy paying attention to everything so I’ll have fodder for NaBloPoMo. 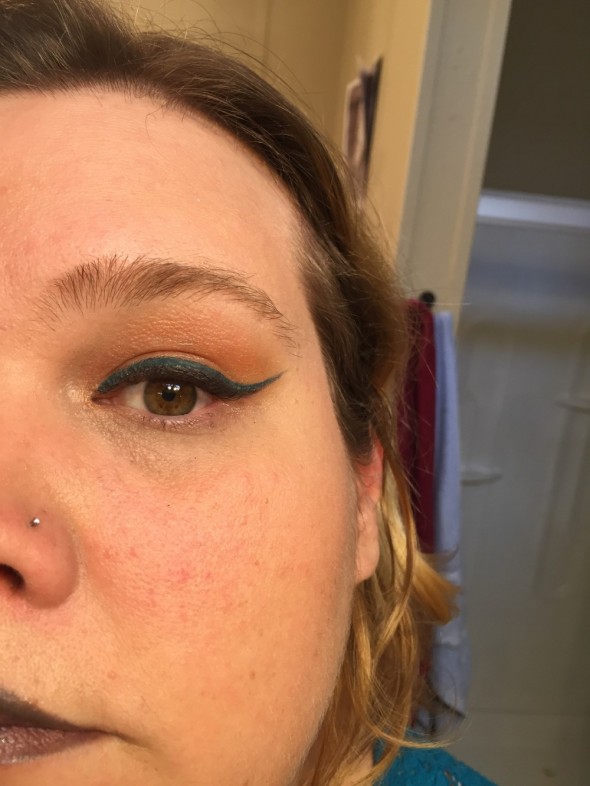 Meanwhile, take a gander at this teal and charcoal double liner, y’all.

Ian looked through his pictures after reading my post yesterday, and sent me the first stranger picture he found. 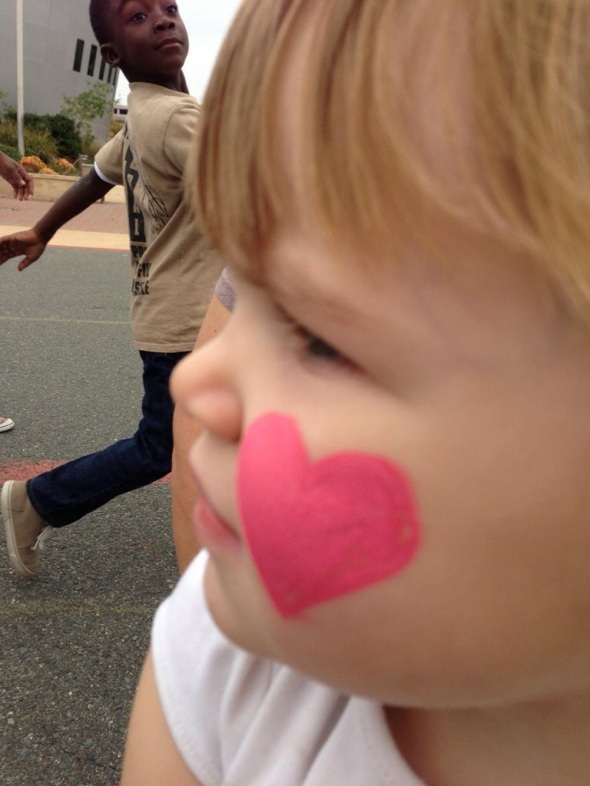 It’s from the 2012 Red River Revel. Is that not an awesome photo bomb? And even better since he’s in focus, not Abby.

Ian does tend to take more of the pictures when we’re out and about. I figured he’d have stranger pictures, but I’d forgotten about this gem.

We often capture strangers in photos we take in public. Open your photo library, and stop at the first picture that features a person you don’t know. Now tell the story of that person.

I opened. I searched. I scrolled through the 832 photos I have taken and kept since I got this phone nearly two years ago.

I don’t take pictures of strangers.

Is that odd? I never considered it before this prompt.

But I don’t take pictures of strangers.

What does it say about me that I don’t take pictures of strangers?

Have I become so sensitive to avoiding conflict that I unconsciously avoid that are you taking a picture of me accusation?

Am I so self-centered that I don’t want to share my memories with strangers?

Do I choose my pictures to focus on my focus without the distraction of an unnecessary element?

I don’t know. I’ve never thought about it.

Do you include strangers in your pictures?

This morning Abby and I sat outside while Ian tried to fix the weedeater, and while I haven’t been on Twitter lately, Abby figured out how to tweet Sesame Street YouTube links from my phone. She also took some lovely photos of the pecan tree, Dad, and the ground. 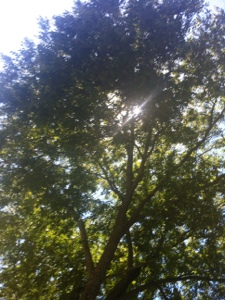 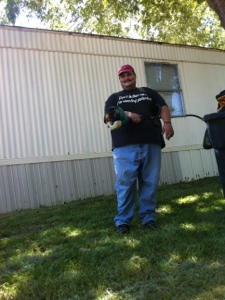 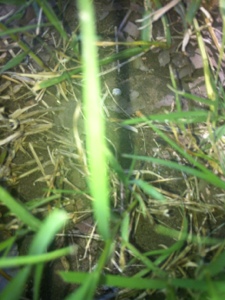 Today is my best friend’s birthday and my brother-in-law’s birthday. Abby has been singing ‘Happy Birthday’ for about three weeks now, and it was finally her chance to sing it to someone. We had Uncle Thomas over for strawberry cake and pizza, in that order.

And now it’s almost time for Switched at Birth and Hoarders!!