And Never Was He Heard From Again

Celeste twisted the promise ring on her finger. She closed her eyes and thought back to when her boyfriend Mark gave it to her.

It was August 27, 2002. After a long after noon studying at the library, the two hungrily moved on to the nearest pizza parlor, Sally’s. It was Celeste’s favorite restaurant, and she loved ordering her pizza and then waiting for it outside on the patio and dining al fresco, every now and then tossing a bit of crust to a hungry bird hopping nearby. 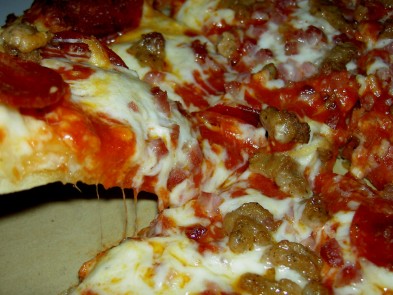 That fateful day, Mark ordered their usual, a hand-tossed pepperoni and sausage with extra cheese and two Cokes. They took their red plastic cups of soda and retired to Celeste’s favorite patio table, the one in the far corner with the cracked umbrella. They sat next to each other, on adjacent sides of the square table.

When the waitress came outside bearing their pie, Mark and Celeste cheered. It was their ritual every time they came to Sally’s. Aside from that one time they scared a brand new waitress and she dropped the entire pizza on the ground, it always went off without a hitch. And a good time was had by all. Today was no different.

They ate in companionable silence, smiling and staring adoringly into each others’ eyes every so often. By the time they’d eaten their fill, though, Celeste was starting to wonder what was wrong with Mark. He was acting differently. Nothing specific that she could put her finger on, just…different. He got up to get a box to put the rest of their pizza in and she watched him with concerned eyes, letting the worry that she’d hidden so well come to the surface.

When Mark came back with the box, he placed the slices into it and closed it up, then walked around to Celeste’s side of the table and got down on one knee before her, pulling a ring box from his jeans pocket. She clapped both hands to her mouth in shock and surprise. So that’s what he’s been planning, she thought.

Mark had a lovely little speech about their youth and how much they loved each other in spite of that and how one day he would ask her to marry him. Celeste began sobbing halfway through, so she didn’t remember the exact words, but she was sure they were perfect. Mark was perfect, and all was well with the world.

When he was done and the ring was on her finger, the one other couple on the patio applauded, and Celeste smiled at them. Mark picked up their pizza and left a tip on the table for the waitress and they left, on their way to Celeste’s house.

They’d gone less than a block when a nosy bar patron leered at them. “What makes you so happy, huh?” she snarled at them. “Give it time, and you’ll find out all your assumptions are wrong, and it’s a rotten world we live in.” Mark tugged Celeste along by the hand, telling her to ignore the woman, that she doesn’t know anything. Celeste nodded, but the seeds of doubt had been planted.

At the next alleyway, the one that Celeste had always, always feared more than any other, without knowing the reason, someone grabbed Mark and pulled him around the corner. Celeste was jerked along behind, refusing to let go of Mark’s hand. She caught a glimpse of someone in a ski mask, and that was all she remembered.

No one ever found hide nor hair of Mark, but Celeste never gave up hope. She lived her entire life knowing that he could be right around the next corner.

Salina paused by her living room window, the one facing the lake. She put her hands on her hips and stared. The tiny island in the middle of the water didn’t have any buildings on it before, but there it was.

It looked like a storage building. Far too small for someone to live in, but the island wasn’t nearly big enough for an actual home anyway. And it would be such a pain to have to take the boat any time you wanted to go to the library, she thought.

Salina didn’t spend much time on the water; she much preferred to be simply near the water. She couldn’t fathom the motivations of her neighbors who were constantly swimming or boating or skiing. Someone living on an island was too far beyond her ken.

Still, better safe than sorry. She made a mental note to call the sheriff in the morning to ask about it as she pulled her curtains closed and made her nightly loop around the cottage, turning off the lights and making sure everything was in its place.

The image returned to her mind as she was cozying up in bed with her newest book. She closed the book on her finger and wondered. When did that building get there? And how? She sighed, and nestled into her pillow, cracking her book back open and picking up where she’d left off.

Maybe there would be answers in the morning.

Dogsbody peered from behind the corner of the brick building. The coast was clear, so he exited the alley and made his way south on Fourteenth Street.Every now and then someone passed him walking in the opposite direction, but he covered the scars around his mouth well enough with his coat collar that they didn’t notice.

It was forty minutes before he arrived at his destination: a brick building disappearing into the sky above his head. A building that appeared identical to the one which he had spent the past six nights sleeping behind. While the two were built from the same blueprints, the differences were made clear by the contents within. Dogsbody pushed the revolving glass door open and entered the main lobby, cringing in apprehension.

He worried for nothing, however. The receptionist gave him a warm smile as he stepped onto the carpet in front of her desk.

“Who are you looking for, sir?” she asked without the slightest tinge of disdain for the poor sot slouching in front of her as he tried to hide his face with his dirty coat collar.

The receptionist was well-versed enough in her duties and practiced enough in providing them to unusual clientele that she easily understood what Dogsbody said and directed him to the seventeenth floor. Her eyes followed him shamble toward the elevator bank before she reluctantly returned to the phone ringing to her left.

Dogsbody pressed the up button to call the elevator, and noticing the smudge his finger had left upon it, rummaged through his coat pockets for a clean bit of fabric. Finding none, he swiped at the button with the side of his fist, enlarging the smear. He quickly glanced around to make sure no one had seen him. The receptionist was the only other person in the lobby, and she was busily answering her phone, so he relaxed a bit, looking down at the tips of his worn leather shoes.

The dinging of the elevator’s arrival called him back to the here and now, and he took a step backwards in case any bigwigs were exiting the elevator, but the doors opened on no one. He stepped in, turned to face front, and pushed the button for seventeen, this time without leaving any residue behind. His hand crept back up to his collar, tugging it over the scars out of habit, even though the elevator walls were a matte finish, and he couldn’t see himself in them.

No one else called an elevator between the lobby and seventeen, so the ride only lasted a few seconds. Dogsbody’s stomach grumbled angrily as the doors opened on seventeen. He winced in pain and embarrassment, but again, not a soul witnessed his predicament.

He was standing in the middle of a great hall, but only a single door led from the hall to anywhere else. A discreet sign placed on the wall at eye level read simply Mr Walker. Dogsbody shifted his weight from foot to foot as he stood in front of the door, unsure of whether to knock or simply walk in. He ultimately chose the former, and his knuckles landed on the wood with the mildest of raps, the sound absorbed by the thick, solid wooden door.

It was enough. The door eased open as if of its own volition, and Dogsbody entered. He half-expected another receptionist, perhaps the twin to the one who had greeted him so warmly downstairs, but that was not the case. The entire floor was one large open space, with a modest desk placed not far from the door, a single chair waiting in front of his for a single guest to be seated.

“Have a  seat, Dogsbody. I’m going to make you an offer,” Mr. Walker gestured at the empty chair with his open hand.

Without a word, Dogsbody approached and took a seat in the chair. He listened ever so carefully to what Mr. Walker told him over the next six and a half minutes, and when Mr. Walker was done speaking and staring expectantly, one eyebrow raised, Dogsbody nodded once, slowly.

Mr. Walker clapped his hands together and interlaced his fingers. “Very good, Dogsbody. I’ll see you again when the job is done.”

Dogsbody knew his time was up. He stood without another word and brushed the dandruff of the back of the chair as he left. He planned to finish this job for Mr. Walker or die trying. He was so tired of trying to make his life worth living when it never was.