“Just toss that bag in the back, there, girl, and climb on in,” he said. 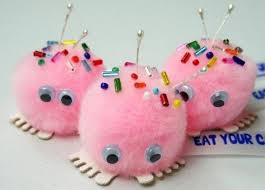 Frannie did as he bid her, and settled herself deeply onto the passenger side of the baja-patterned bench seat with two dips, the one behind the steering wheel much deeper than the other. She peered around, especially eying a trio of pink fluffy googly-eyed creatures stuck to the dashboard, each wearing a sprinkling of beads on top.

The man entered the driver’s door and slammed it behind him, startling Frannie out of her reverie. “Oh, my little girl gave them to me once upon a time,” he chuckled to himself when he saw what she was staring at.

Frannie thought quickly. If he already has a little girl, I might be out of luck–but he’s awfully old to have a little girl my age, isn’t he? Well, nothing but to go ahead and ask. “You have a little girl?” She couldn’t quite keep the wistfulness from her voice, and he immediately reassured her.

“I did once upon a time, but she’s all grown up and has two little girls of her own now.” He nodded ahead of them, down the long straight highway to everywhere else. “I see her once in a while, but they live all the way to California now, so it’s not near as often as I’d like. Say, my name’s Henry, I’m sorry for not introducing myself sooner.”

“Frannie. It’s a pleasure to meet you, sir.” She stuck out her hand, and when it caught his eye, bobbing wildly over the gulf between them, he grinned from ear to ear and reached out to clasp her tiny paw with his own. She gave two firm pumps, up and down and up and down, and released.

“Pretty fair handshake you got there, Frannie,” Henry complimented her, still smiling.

She smiled broadly herself, showing Henry the single spaced gap where she’d lost her first tooth just three days earlier. “Thank you. Do you have a wife?”

Henry’s smile faltered, and he shook his head. “She passed away two years ago.”

Frannie was young, and not quite sure what to say to that, but still, she felt the emptiness of something needing to be said. “I’ll bet she was pretty.”

This was exactly the right response. Henry brightened immediately. “She sure was. Prettiest girl I ever laid eyes on. Well, here we are.” He broke off as he turned onto a gravel road.

Frannie wondered where the house was, but just as she opened her mouth to ask, Henry rounded a curve and there it was before them: a lovely old farmhouse. Her eyes widened with excitement.

“Help me carry these groceries in and I’ll get you fixed up with some supper, how’s that sound?” he asked.

“That sounds wonderful!” Frannie’s words came out with more enthusiasm than anything she’d said in hours. She couldn’t wait to get inside a house again. One whole day on the road was more than enough for her.

Read more of Frannie’s Misadventures here and find out how on earth she got where she is today.