Today I’m on assignment: write for twenty minutes. Don’t think, just write. Twenty minutes seems like such a long time to write, and yet no time at all. As I’ve been writing more and more, I’ve noticed that I take more and more time on each of my posts, tweaking word choices and editing sentence structure. It’s overflowed into my reading. I have a hard time reading anything now without editing in my head as I go along. That’s an unusual choice of words; this would work better. I wonder why he put it that way; this way is simpler and flows better.

I started reading The Maze Runner trilogy a couple days ago, and the one thing that bothers me the most is the author’s choice of sun flares instead of solar flares. Every time I read it, it grates on my inner ear. Sun flares. I’d go with solar.

And I can’t type without picturing how it should look on the page or the screen. It’s a quick click to switch to italics. And when I’ll never talk to any of you out loud, italics are so darn useful. They help me come across as me. Can’t help myself.

When I was sick two weeks ago, it was actually a spider bite. I’d never been bitten by a spider before, so it was a new experience. After the first few days I was feeling mostly better, but after a week the bite started to darken and we all know that’s not a good sign.

It was a huge mess to get a medical treatment, though. It started to worsen on a Friday afternoon, of course. Saturday was worse, and Sunday more. I was trying to stick it out, but since it’s on my face, I didn’t want to fool around anymore. Ian would have taken me to the ER on Saturday if he’d had his way, I’m sure.

So Sunday I looked up where my insurance would cover urgent care, and wouldn’t you know it, the nearest one is closed on Sundays. They couldn’t have put that information on their website. That would have been too easy. Oh, no. Only the much farther location is open on Sundays. When we got there it was packed. They’re only open four hours, and it was a three hour wait time. Which we couldn’t do since we’d already wasted so much time going to the other location to find out that they were closed; Ian had to be at work.

On the way, Ian called another place that my insurance would at least partially cover, so we went there. Only to find out that due to a new policy, they’d need a hundred bucks up front. I’m a little iffy on the legality of that charge, since after my insurance, I wouldn’t owe $100. But whatever. With what we have going on right now, we don’t have the money to spend.

Whatever. The last urgent care is just around the corner. Closed–twelve minutes ago.

I had no idea a spider bite would hurt so much when it’d already been nine days and it wasn’t even that big.

Wolf spider, by the way. Non venomous, but apparently I have a sensitivity to them. Let’s not go through this again, shall we?

Monday morning we went, and the patients started pouring in after I registered. I’m glad we got there at the right time. We were home in about an hour and a half, with antibiotics and pain meds, and strict instructions to return if no improvement in 48 hours. I think Ian was a little more freaked out at that than I was.

Fortunately, the pain was almost gone by the following afternoon. The second day of antibiotics, the color started to improve as well.

And it was a rare treat to be treated as intelligent human beings by a medical professional. Neither the nurse nor the PA had to ask what PCOS was, and the PA even asked if I was taking metformin for it. Such a shock! And when I explained my penicillin and cipro allergies, he asked if I’d ever had a problem with Bactrim before prescribing it.

It’s a shame when normal conversation is the exception to the rule.

Today the scab came off, and it hurts a bit more than it has.

Well, that twenty minutes wasn’t so bad. My word count does tell me that I stopped to think more often than I should have.

Let’s see what Writing 101 homework is next.

Last week we faxed our applications to the facility in Monroe for background checks so we could visit my brother. Wednesday we were approved, and since the restaurant was closed this morning and Ian had off, we left to make the 90 minute drive to visit.

I had no idea how hard that drive would be.

I was working in West Monroe when we were having problems, and I made this very drive almost every day. Always before, I’d dreaded having a job that required a long commute, but this was when I learned to love it. I appreciated having three hours all to myself every day, time to think and hash through my thoughts and feelings, and especially time to relax and let the stressors of the workday go.

We had a good car and a crappy car, so I’d take the good car since I was going three times as far. If I was heading home while it was still daytime and Ian had to close, I’d stop by his store on the way home and swap out vehicles.

It was one of those days that I stopped that I knew in my heart what was happening. Ian wasn’t in the store; his employees told me he was doing a ride along. I had just given up waiting and was headed to the car when he showed back up. With her. And I knew. I saw his face, and I saw her face, and I knew. But I still couldn’t admit it to myself.

I relived every single bit of that pain this morning. I tried to think of other things, any other things, but I couldn’t. I tried to just avoid looking at the signs, to pretend we were on some other stretch of road. Then I tried to watch the truck in front of us. Then a tiny patch of interstate directly in front of us. I ended up not letting my eyes stray from the reflection of the dashboard on the windshield, holding onto Ian, the occasional tear making its way from my eye.

And then the tread came off the front driver’s side tire. Neither one of us knew what had happened at first, we both thought something must have fallen from the 18 wheeler we were passing. Ian pulled over, and we surveyed the damage. Quite a bit, to say the least. Bumper, headlight, wheel well, quarter panel, door.

He’d pulled over a few dozen feet from an old packed dirt road, so we limped up there to change the tire. I called the insurance company to see if we could make a claim, and sure, it’s made, but we can’t afford the deductible right now, especially not knowing if we’ll have to pay another counselor in three weeks.

Ian got the tire changed, and of course the spare was low. I let him take a break while I walked down to see what mile marker we were near, and he called the state police to see if anyone was nearby, but we were fifty miles from each of them. I waited on hold for a few minutes trying to call the insurance company back for roadside assistance, but I gave up.

While we moseyed on down a few miles to a tiny town at the next exit, I called my stepfather to see if there was any way we could get a message to my brother. Understandably, he wasn’t optimistic, but he tried, and sent me a text later that he was able to leave a message, but doesn’t know if or when my brother will get it.

The only gas station on Main Street was long closed, with no air pump anyway. We went to the police station, which I was surprised to find locked, but someone came out and gave directions to another gas station a few blocks away. Where the air didn’t work. Ian came out of the store with an employee who punched the machine to get it working, and we headed back home.

This time I looked at the floor, and read the upside down Johnny’s Pizza coupon over and over, until Ian put his arm around me and pulled me to his shoulder. I finally asked, ‘if we go see my brother, can we go another way?’

And Ian promised me that we’d never come this way again.

My mom is pretty sick. She has been for the past few years, but as long as she gets her chemo every few months, she’s great.

She was here three weeks ago, and was doing pretty well. She forgot her insulin and some paperwork when she left, but that’s not so bad.

Now she can’t drive anymore because she has double vision, she can’t walk very well, and she falls a lot.

We were texting earlier. I can overlook a few typos, but I have no idea what she meant by ‘bcause the ky Oates I swaroried.’ I was afraid to ask, and she didn’t elaborate.

I worry about her.

The Year of the Free Care 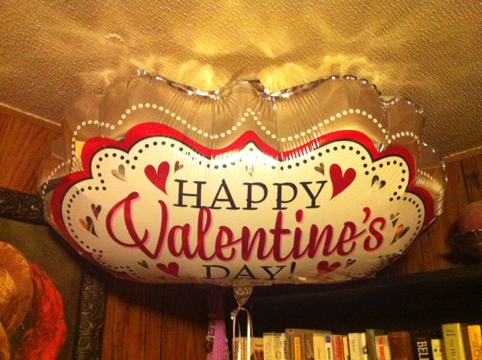 My husband surprised me with this balloon last night. Belle, he does love me whole bunches! And if you look closely, perhaps you can identify Taking Charge of Your Fertility and Making a Baby on the bookshelf. I didn’t realize that until uploading the picture.

As the title may have clued you in, the hospital finally approved my free care application! And backdated it to my first appointment this year. Yay!

And we have a complete about face. The only good thing I have to share is that my ovaries look completely normal!! I’ll have to come back later to tell you about the asshole I saw instead of my doctor.