So they’re all dry now. 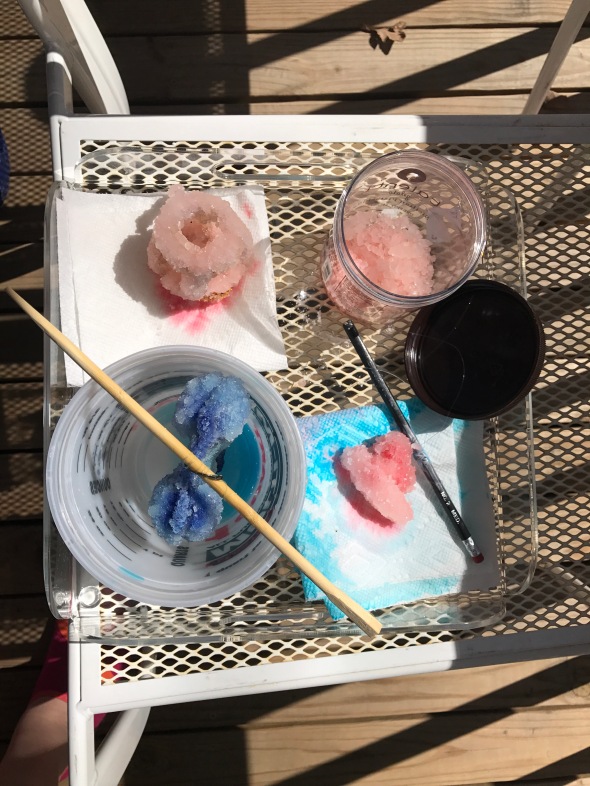 We just have to figure out what to do with them.

We tried borax crystals today. They made crystals, but not the big ones we were led to believe we’d see. Also they’re crystallized to the tubs we made them in. Tomorrow we’ll figure out how to remove them without breaking them to pieces. 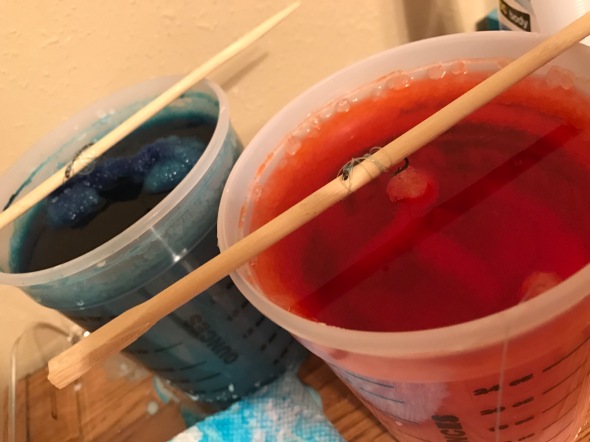 Today was a good day.

I’ve been having unpleasant and vivid dreams every night.

It all started three weeks ago when I went to the doctor for a followup appointment. He said my cholesterol is high normal, most likely due to genetics and not my diet (thanks for that boost, man), and started me on a low dose of Lipitor. Three days later, I was wondering if that was the cause of my crazy ass dreams and googled it–yup, that can sure happen.

I also learned that Lipitor can increase your risk of diabetes. Thanks, doc, like I don’t already have enough strikes against me. So I stopped taking it. But the dreams haven’t stopped. Last night was the worst one yet, involving burnt pieces of people, mostly children.

But it was just a dream, so I’m okay.

I had to wake up early to wake my husband up so he could take his dad to the doctor, but I went back to sleep, so there’s that.

I woke up half an hour later because my mother’s home health nurse showed up. My mother had a knee replacement done last week. That is a whole ‘nother story, my friends. But whatever, I went back to sleep for another little bit.

I finally got up and took a shower and figured out what to wear to my interview, and my husband still wasn’t home. Eventually he made it, bringing his brother for a haircut. He shaved his brother’s head, which was interesting, as I’ve always known him to have long hair.

Then he brought his brother home and dropped me off for my interview. He let me out at the employee entrance, and one of my friends from housekeeping was taking a load of trash out. He was happy to see me, and asked if I was working there again. I told him no, that I was just coming for an interview, and he wished me good luck. I stopped by and said hi to my old assistant manager, who wished me luck, and headed to my interview.

She told me I would have to wait. Okay, no big deal. I moseyed around and looked at body jewelry for ten minutes while she sassed a customer, wandered to the office, wandered back out, rang up the customer that she’d sassed, rolled her eyes at a coworker’s question, kicked a backpack around behind the cash wrap, and flipped pages on a clipboard.

When she’d made me wait long enough for offending her, she simply walked toward the front of the store without saying a word to me. Her coworker told me she’s ready for you now. All three of us stood at the lease line, me quite awkwardly witnessing my interviewer berate her coworker for bringing some jewelry with her to ask another question.

We sat at a table behind the closed gelato stand to talk. First she handed me a copy of my application and asked me to make sure all of the information was correct. I looked it over and told her that the only change was that I was no longer employed, but since I’d already put that I could start immediately, that didn’t affect anything else on the application.

I also explained that while I’d answered the question about how many jobs I’d had in the past two years with the number three, they were simultaneous jobs, and that I’d maintained steady employment with my most recent employer for the past four and a half years, the first three and a half with a second job. She reassured me that was fine, even thought there was no place on the application to explain that.

No small talk, just four pages of pre-supplied interview questions including when was the last time you shopped with us and what were you shopping for, tell me about a time when you received bad guest service, and who was the best manager you’ve ever had and what did you learn from them. She didn’t care about my answers, but at least she took notes.

When she was done she told me that she would speak with Mr Manager tomorrow and he would give me a call to let me know their decision. I think she was upset that I wasn’t solemn enough about the whole situation, which is funny because the company’s slogan is life’s a party, we’re making it fun.

But I’ll find something out tomorrow. Probably.

My husband picked me back up at the employee entrance. We dropped off his dad’s prescription and went to the hardware store for some supplies to use in our crystal-making endeavor that we had planned for this evening. That, my friends, is yet another story, which you may possibly read about tomorrow when I have the final results.

We went to Walk-On’s for dinner and then hit Target up for two whole hours of date night fun. I got three new books, and here is a picture of them, a la Stephanie at AoaB. 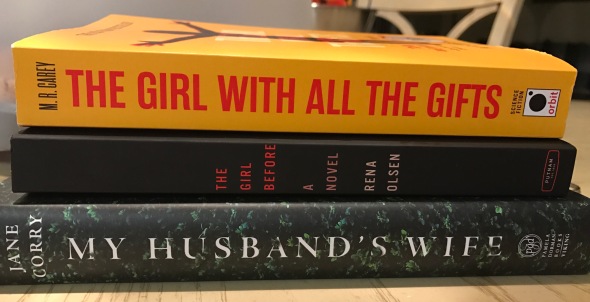