Phil was an emotional wreck.

He peered out the window for a brief instant before twitching the blinds back into place. No one was going to show. He knew it in his heart. He put out a hand to catch himself on the arm of his favorite easy chair, but missed, and collapsed all the way to the floor. He curled up, hugged his knees to his chest, and began bawling his eyes out.

A knock on the door startled him, and he rose quickly, dashing the tears from his face with the heel of his right hand. When he opened the door, His lips moved, but no sound escaped to welcome his sister and her new husband to his home.

“Hey Phil!” cried his sister Lynette. she took a step into his domain and dropped her purse on the table next to the door before squeezing his ribs ever so tightly. “This is Robert, I’m sure you remember that.” She gestured Robert to come inside as she sidled Phil gently out of the way and softly closed the door.

Robert stuck out a hand. “Nice to finally meet you, buddy.” He smiled broadly, a smile that began to wilt when Phil failed to grasp his hand or even speak at an audible volume.

“Don’t worry, hon,” Lynette patted her husband on his upper arm. “Phil gets a little freaked out when he has company. Why don’t we all go sit down in the living room?” She led the two men into the adjacent room and settled Phil on his easy chair before ushering Robert to one end of the couch. She took the other end.

Phil teased a stray bit of string from the upholstery with his forefinger and thumb, refusing to look up at the invaders on his couch. He suddenly regretted ever buying that couch. If he hadn’t gotten a couch, there would be nowhere for them to sit, and then perhaps they wouldn’t have come at all. They wouldn’t be invading his sanctuary.

When he finally looked up, the couch was gone, and the floor was dusty in the spot where it never was. A single tear followed in the tracks already left on Phil’s face as he realized that he’d done it again.

He’d forgotten that he was an only child. 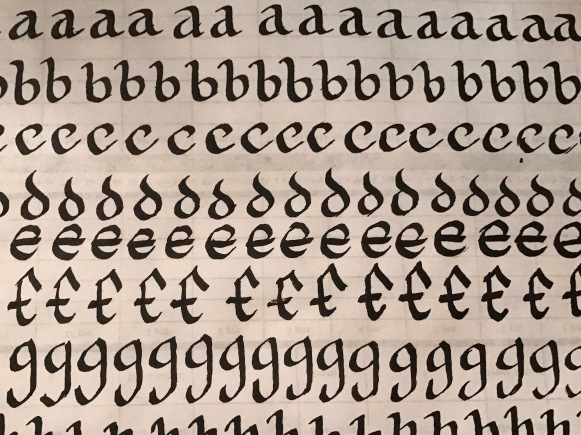 Everyone left today. It was glorious. My husband went to work and my mother took a nap and it was just me and the cats, who were snoozing merrily. So I sat at the dining room table all by myself, and I practiced calligraphy and listened to ambient music for an hour.

And then I made meatloaf and the broccoli and cheese sauce that I forgot to make on Thanksgiving. It was delicious.