This morning I packed up the POS and cash drawer and now we’re officially closed. Super sad. Tomorrow morning I start at the other mall. It’s probably gonna suck.

But tonight I started wood burning, which does not suck at all. It’s pretty dang awesome. I did one practice thingamabob and then it was straight to driftwood chips, which are even more awesome.

I have done six so far, the others with names for friends and family, spending about two hours on them altogether. I have a sore spot on one of my fingers from the handle, so I wrapped it in some duct tape. Hopefully that will help some. But I’m probably done for the day anyway. It’s on to filing my taxes after this. 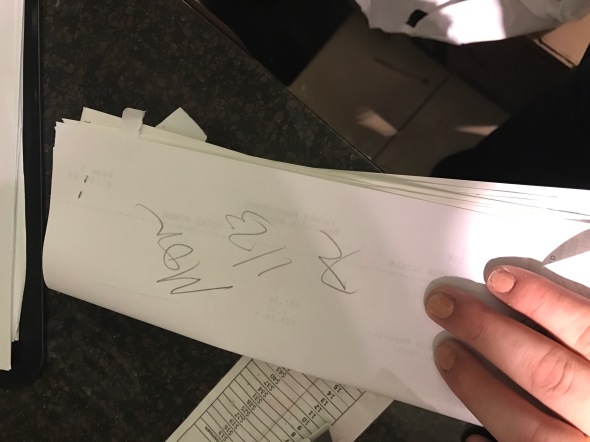 Tonight was my last night closing. Our final day of business is tomorrow. *sniff*

Today I bought the sweet globe.

Only one more week of business.

I’ve decided to transfer to the other store in our area. So I’m not entirely laid off, but I’ll only be working two days a week there. And I won’t be with my family.

In between I continued to put out merchandise that isn’t currently on display. And I finally opened up this globe and had a look at it. It’s been sitting on the second shelf in the office section in storage for the four years I’ve been here, and I had no idea what it looked like.

So I boxed it back up and returned it to its shelf to wait for deeper discounts so I can bring it home.