here is a chicken
black, white, and red all over
pecking here and there

If your Facebook feed is anything like mine, it’s inundated with Tasty recipe videos and their ilk. Sure, most of the stuff looks amazing, but when it comes down to it, who actually takes the time to make all this crap?

But I saw some buffalo chicken mac and cheese the other day when I was trying to find the crock pot buffalo wings my stepdad was talking about. Purely train wreck curiosity, I was not planning to make some tasty, crispy wings in the freaking crock pot, trust me.

Anyway, didn’t find those, but I saw the holy grail of side dishes.

Ian found another recipe and shared it, tagging me. 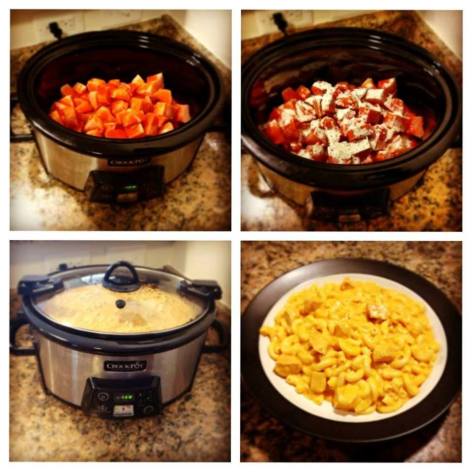 Last night, I made it.

I don’t think I even need to say this, because it’s a recipe from the internet: I did not follow the instructions exactly.

Directions:
• Cut chicken into bite-sized pieces and add to Crock-Pot® Slow Cooker
• Pour entire bottle of buffalo sauce and packet of ranch mix on top of chicken
• Cook on low for 5-6 hours (until chicken is cooked through)
• Once chicken is ready, boil and drain the macaroni and set aside
• Melt butter and grated cheese in a saucepan over medium heat
• Place cooked macaroni, melted cheese, sour cream, beaten eggs, cheese soup and seasonings on top of the buffalo chicken
• Cook on high for about 2 hours

I used medium shells, because they’re better. I used a dismantled rotisserie chicken, because we went to the store at 4, and I wasn’t waiting until midnight to eat. Or the next day. So I dismantled the chicken, put it in the crock pot, covered it in desperate housewife cocaine and buffalo sauce, and moved straight to the fourth step.

And now, reading the ingredients again, I notice that I forgot the milk entirely. This did not harm the final product. And in my defense, it’s not in the instructions.

Y’all. This stuff is so good. Which is why this post is categorized not only under Food but also Emotions and Self Improvement. Because I had them and did some.

I will likely leave the chicken out to make this as a side dish instead of main course.

The Mystery of the Missing Wishbone

Last night I made a creamy chicken and wild rice soup for dinner. I used a rotisserie chicken for the meat because it’s easy. I’m a huge fan of storebought rotisserie chickens. I used one for the chicken pot pie I made last week.

As I deconstructed the chicken last night, I had an unsettling realization.

I had no idea what happened to the wishbone from the previous chicken.

I FORGOT UNTIL I PULLED THIS WISHBONE

No joke, people. I put that wishbone somewhere. I remember doing that, because Ian was at work and I wanted to have it so we could pull it when he got home. I had to have put it somewhere safe, because we have cats.

My heart sank and my gorge rose as I realized that one day soon, we may find that wishbone by smell.

I texted Ian some more.

Did I put it in the microwave and someone threw it away? Idk, maybe

Did I change my mind and throw it away? Idk, maybe

Did I hide it somewhere and it’s now rotting there? Idk, maybe

DID WE BREAK IT? IDK MAYBE

That wishbone is a void in my memory.

In case you didn’t notice, I am highly entertaining via text message. Borderline hysterical. At least, I think so.

And do you know what else? I still have not a clue where that wishbone is.

Last night’s wishbone, however, I do know about. I put it on a bowl in the sink while we went outside, and when I came in, Rillo had stolen it and was trying to eat it. Don’t worry, I got it away from her and put it deep in the trashcan.

BUT WHAT OF THE OTHER?

The world may never know.

I should go eat some almonds. Right, Susie?

Tonight I made chicken and sausage gumbo. It was a last minute decision. Last minute as in I didn’t have time to simmer chicken to make stock and cook the chicken.

I don’t recommend this. It’s hard to find a rotisserie chicken after nine at night.

I didn’t find one.

But I found some.

And I got my assignment for my first contest story!

And this title is to be sung à la Henry the VIII, I Am. On a roll today, kiddos!

Ian and I went shopping on his break this afternoon.

And purchased, among other items, a pair of socks.

We are lackadaisically debating the species of roasted fowl depicted thereon. Chicken or turkey, what do you think? I vote turkey.