I delivered to an apartment building tonight; this was the lobby.

“It’s definitely affordable.” Brenda was embarrassed that those were the closest she could come to words of comfort, looking around her best friend’s new apartment.

Torie stared over the top of her glasses, waiting for Brenda to finish the compliment.

It took Brenda a minute to realize that she was supposed to say something else. “And I know you’re looking forward to the freedom that you’ll have, moving out on your own, no roommates at all!” She heaved an inaudible sigh of relief, wiping the sweat from her brow in her mind’s eye.

Torie’s gaze softened up a bit. “You’re absolutely right there, Bren. No more waking up to Kit’s alarm at five in the morning, and no more cleaning Jen’s spilled off-brand cola on the kitchen counter. I can’t wait for that!”

Brenda took six steps over to the window, which looked out on a courtyard bearing one lonely artificial tree in a terracotta pot. A barbed wire-fenced courtyard. She sighed and surveyed the apartment once more. What there was of an apartment.

The living room was barely large enough for a loveseat, and the kitchen even smaller. The bathroom was the only other room. Efficiency didn’t begin to describe the tininess of the place. She realized that Torie was talking to her, and tuned back in as quickly as she could.

“…so wasn’t that brave of her?” Torie raised her eyebrows, clearly expecting Brenda to agree. Brenda nodded enthusiastically, smiling as she did so.

“Absolutely. So when are you moving in, again?” Brenda changed the subject even though she knew Torie would need help moving the day after tomorrow. 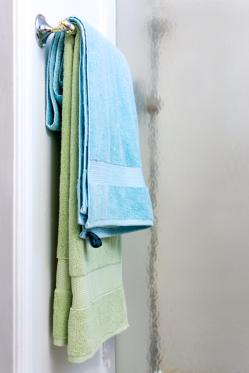 The water lapped against the side of the tub, waves crashing on a porcelain shore. She brought her foot back underneath the water, and it slopped over the edge, wetting the ancient blue bath towel she used as a rug there.

She turned her head to nestle her chin into the hollow of her shoulder. Slowly, her eyes began to close of their own accord. The chain lock rattled against her front door, and the sound caused her eyelids to fly open. She shot upright in the tub, gripping the sides until her knuckles turned white and her heart raced out of control. A voice, faint from distance and solid wood doors, called to her.

Recognizing the voice as a frequent visitor of her neighbor’s, she relaxed back into the water, sliding down to the welcoming warmth. Her pulse slowed its pounding in her ears, and she lifted her right foot to plug the open mouth of the faucet with her big toe.

The suds were subsiding, and she felt around beneath herself for the cap of her disposable razor. She didn’t find it; she assumed that when she pulled the plug, it would be lost forever down the drain whose crosshairs had rusted away years ago. When she rose to grab her towel and the plug’s chain slipped through her fingers, she had already forgotten to watch for its journey into oblivion.