Frank picked up his phone and called the pet store. The empty aquarium had been bubbling in his living room for far too long, and it was time to do something about it.

Some punk kid answered the phone with disinterest, and Frank simply ended the call. There was no way a part-time teenager would know anything about tropical fish. No way.

He pulled on a pair of jeans, shoved his feet into some sandals, and grabbed his keys from the table by the door. It was only a couple of miles to the pet store. He flip-flopped his way in and paced back and forth in front of the wall of fish tanks for nearly an hour.

All four of the employees had stopped by to check on him, more than once, but he waved them off, a fierce look of concentration on his face.

“That’s him!” Frank announced to the whole store at the top of his lungs. Three of the employees immediately trotted over to find out which was the magic fish. Frank’s finger was following a beauty of a yellow tang, lazily flicking its tail as it circled the tank. 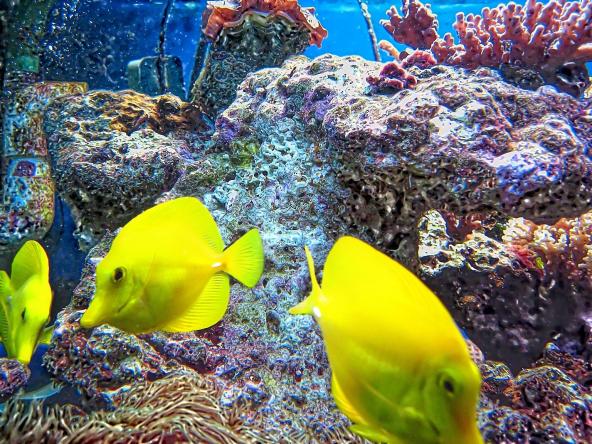 The pony-tailed girl wearing a name tag that said Deloris quickly snatched up a net and a plastic baggie for the lucky fish. She deftly scooped it up and tied the baggie before handing it to Frank. He cradled it lovingly and headed straight for the registers.

Frank nestled to bag into the crook of his elbow to use one hand to open the drink cooler and snag a blue Gatorade, which he placed on the conveyor belt. He paid and brought his new friend home.

Frank never took a break from the upkeep of his saltwater tank, so he popped the fish right on in there and stepped back to see how it liked its new home. He gasped, appalled  that he’d nearly forgotten the most important part. He unscrewed the Gatorade bottle and used an eyedropper to collect a bit.

And then he counted four drops into the aquarium.

Frank wasn’t quite right in the head.

2 Comments on “Yellow Tang and Gatorade”