Family Day at the Revel

This morning we went to the Red River Revel and had a blast. This was the first time I’d been since I was sixteen and painting faces for my church group, the first time Ian had gone in years, and Abby’s first ever. It’s an arts festival, but there’s also food, music, and a children’s area. We’d planned to go today because the newspaper reported there were no school field trips scheduled, but a lot of preschools had the same idea. Still, it wasn’t too crowded, and all the groups of kids were well-behaved.

We entered and decided to take a quick look at some booths before heading over to the kids’ area. In just those few, we saw fine art, folk art, jewelry, and puppets.

Abby fell in love with this two-legged goony bird, so we let her pick one out to bring home. Her favorite part was when the lady showed her that he can eat from her hand. Then we distracted Abby with a chip from the salsa booth because man, those empty spots of fence between booths are just awesome!

We headed down the ramp toward the children’s area where we could hear intermittent group screams of joy. That was due to the performing dogs on the stage, jumping rope, singing, and walking the tightrope.

We made a lap to see what was open, were sorely disappointed to find that the mock archaeological dig didn’t open until four, and purchased some tickets to spend. Abby loved the lines of children in matching tshirts marching around with rainbows and footballs on their cheeks, so we started with face painting. 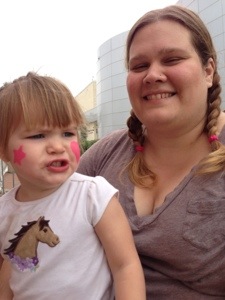 She got a star first, then grabbed the paintbrush to begin a heart on her other cheek, but willingly let the face painter take over.

After the goony birds, I think the sand art was her favorite.

We didn’t get any pictures of the process, but one of the festival staff stopped to film her running between the boxes of sand with her spoon, scooping colors into the funnel Ian held on her bottle. I think she’d have been perfectly happy to dump the bottle out and fill it again, over and over.

Next was the hospital sponsored tent, where Abby refused a sticker, but enjoyed jamming jewels into a putty heart and getting a toy stethoscope. Again, just as happy dumping out the rhinestones and putting them back in the bowl. 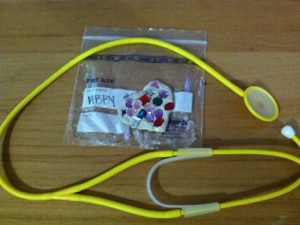 She was getting a little cranky, so I sat down with her to watch the musicians performing while Ian grabbed a funnel cake.

Did you know that’s sugar on top of those things? Holy crap!

Then Abby colored a fish with Dad.

While I took my private bathroom break after accompanying Abby to hers, they amused themselves taking self-portraits.

We went back up to the rest of the festival, checked out some more art, and stopped to watch a pavilion of kids dance to Thriller, before ending up at the food area. Ian had read something about ‘Gargantuan Pork Chops,’ but those weren’t on the website, nor did we see a booth for them, so he settled for sausage, Abby got an Icee, and I had some roasted corn.

Which I shared, of course. 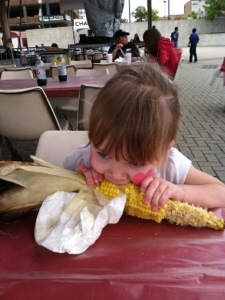 And so the cleanup commenced.

We moseyed back toward whence we came, little cranky butt getting crankier by the minute. She petted a driftwood sculpture of a bird and said goodbye to the puppets on our way out.

When we got Abby settled in her carseat, I asked Ian if he’d mind coming back Friday morning so we could spend more time checking out all the art. He said he’d forgotten I was an artist, that there was a little more to it for me than ‘oh I like that, what’s next?’ and agreed that it sounded like fun. No criticism, sweetie, I know you don’t care about brushstrokes or weights of paper or types of glue, that’s my thing.

Yay! I’m really looking forward to that. There was some amazing stuff made from found objects, some fantastic oil paintings of the French Quarter, and even some cool pop art. I hope I can get some good pictures!

All in all, a great day. We had a ton of fun, and I’m the only one not napping, but I’ll probably be the first one asleep tonight. Now, time to start chicken fried rice for dinner, and a free Redbox rental of The Lorax to watch!

I hear a little goony bird stirring in her room…

8 Comments on “Family Day at the Revel”